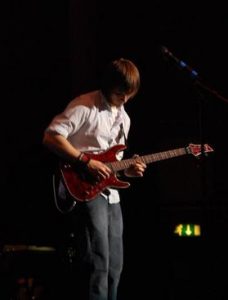 The Name
With no stage name in place as a solo act touring across South Africa, Del would mingle with the audience during breaks where songs would be requested and drinks and other things would be offered.  During these breaks, people would come up and ask, "Hey Muso, can you please play this or that?"  And so the name Muso was born.  So, because he had no stage name, people simply referred to Del as "the Muso", a slang term for a musician in Cape Town culture, and in no time Del became very well known as Muso in the live music scene.

The Story
The Muso story started out in the mid-70s when Del received his first guitar (which he still has) at the age of 15, an awesome  Yamaha 12-string Semi Acoustic that his Mom bought off a local rock band in Cape Town called Morning Glory (ahem).  It didn't take Del long to start playing and writing, and six months later, just shy of his sixteenth birthday, he found himself playing rhythm guitar in his first band, the Soul Survivors.  They were quickly signed to a talent agency, and hit the road in a great big tour bus a la the Tom Hanks movie "That Thing You Do", playing to crowded halls in dusty towns all across the Western Cape ... and so it went ...

After sharpening his act in three bands, ​Del set out on his own, playing one-man shows with just his trusty Yamaha guitar and his voice plugged into house PAs.  A few gigs later  he was signed by an agency, and they booked Muso for live gigs across the country.

Muso built up a good following wherever he played, with Friday and Saturday gigs in particular usually sold out.  During this period, Del met Johnny Fourie, a legendary jazz guitarist from Johannesburg, and he would spend week-ends staying at Johnny's house with his family. Johnny had an amazing guitar collection, and he taught Del about tone and getting your own sound.  Johnny (who had played all over the world at clubs such as Ronnie Scotts and Whisky-a-Go-Go) worked for EMI in South Africa as a session musician, and through this link Muso was introduced to EMI who offered him a recording deal.  Studio time followed, but the failure to match up artistically meant a parting of ways and the guitar being packed away .... and so it went ...

Muso eventually returned to Cape Town and the local gig scene, playing at venues such as The Perserverance Tavern, Ruby in the Dust, Savoy Cafe, Pirates, Pig & Whistle and Quay Four amongst others.

In 1998 Del moved to the UK, and his son Ash started to wander in and sit through some recording sessions, his interest in guitars very apparent.  When Ash turned twelve he got his first guitar, the legendary Yamaha Pacifica, and he soon mastered the fretboard.  To further his musical education, Ash began to contribute guitar solos on Del's demo recordings, which he did masterfully for someone so young and inexperienced.  Ash quizzed Del about his music, his influences and his time on the road.  The kid clearly had a talent and a taste for playing and at 14 was definitely ready to showcase his skills, so it was agreed that when Ash reached 16 they would start up as a two piece.  For their band name Ash insisted they stick with Muso out of respect for the music and its roots.

In 2008 Ash and Del finally appeared as Muso, playing their first gig to a packed house at The Rose & Crown in Wingrave, Bucks. Since then Muso have become a regular fixture on the Bucks music scene, and have also played at venues such as The Jericho in Oxford and O'Neill's in Oxford and Wimbledon.  The band added a drummer, Chris, to the lineup in 2011, having waited for him to finish his music studies at university (yep, actually waited for a crazy drummer).  Today you can catch Muso playing their unique brand of Blues/Rock/Americana - check the site for details of gigs, and follow them on facebook and twitter.